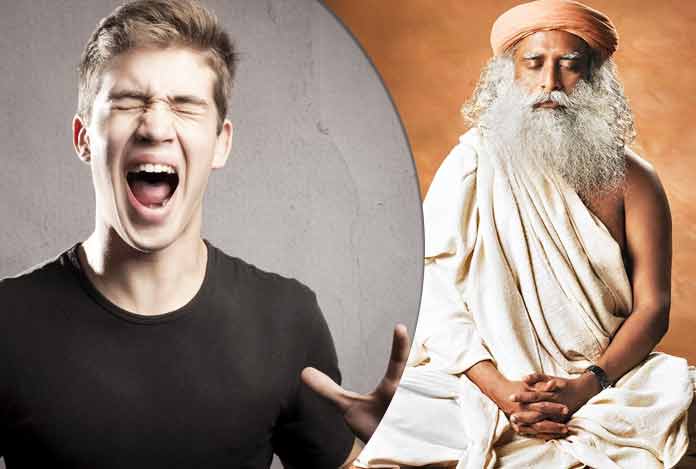 There are situations when people lose their temper and get angry. When a person is angry, they usually end up doing something which they regret later. Therefore, people often asks about the ways that can help them in controlling anger.

According to Sadhguru, anger is just a state of mind, created by the strong sense of likes and dislikes. When a person develops a sense of living and identifies a certain way of thinking, they get mentally bound to their beliefs. They believe that their thoughts and ideologies are right in all senses, and when someone does something out of line, they get angry. This is because when they include something to their likes, they exclude rest of the things from their belief and get stuck to their own ideas.

Besides, anger not only causes damage to social relations, but also causes internal harm to the body resulting in various health conditions. He advises to keep the mind free of all the thoughts that causes anger during the hopeless moments. He further advises to control the sense of likes and dislikes. Sadhguru emphasizes on the need of resolving the situations with intelligence instead of bursting out the anger.

Moreover, Sadhguru highlights the fact that the anger is highly intense and the reason why most people burst out in anger is because they get the sensation of intensity for a few moments. However, everyone in the world seeks intensity. This is the reason why various action movies and sports events are popular among people. But, unlike other ways to experience intensity, anger isn’t pure, it gets mixed up with actions that can seriously affect the life.

Thus, it is necessary to control the anger and emotions, and understand that there is a world beyond likes and dislikes. Thus, there is no point of getting angry about anything or bursting out emotions about something. Everyone around is seeking peace and joy, and anger only spoils it.

Many time, Sadhguru has been questioned that when it is so difficult to breathe in the cities with so much pollution or other chronic diseases that people have to...

What Should be the Ideal Temperature of Potable Water?

A piping hot cup of coffee or tea during the winters or a chilled glass of water might seem rejuvenating, but are you aware of how they affect our...

Sadhguru Explains How to Cope With the Loss of Loved Ones

It is both unfortunate and excruciating to lose a loved one. Death, desertion or a disease might part you with your loved one. The most troublesome part is the...

Spirituality is not just about looking for truth or God, but about learning to observe or paying attention. Sadhguru asserts that every sphere of our life – from religious...

Cancer patients who undergo chemotherapy have to go through excruciating pain and lot of stress. Sadhguru explains whether yoga can of any help for people undergoing chemotherapy. He feels that...

What to Do If Your Parents Quarrel Often?

We often find ourselves in serious and rather sad situations. Many of us are caught in between fights our parents are having. All of this can have a negative...