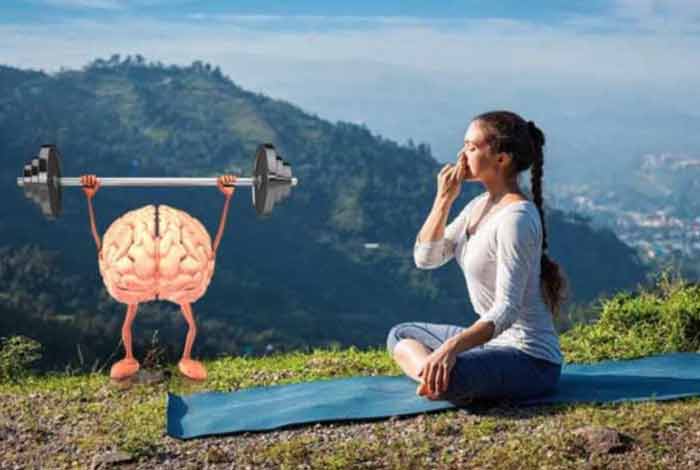 Everyone, from non-yogis to long-term meditators and yogis, swear by the benefits of meditation in developing focus. While till date, they had no scientific evidence to show how breathing affects attention inside the brain, a recent research assessed the neurophysiological impact of controlled breathing. So, breathing exercise helps you give a better wellbeing.

Recent studies are regularly confirming that mindfulness and yoga are extremely beneficial for the brain as well as the body. Practicing yoga or mindfulness for 25 minutes has shown to enhance brain activity and increase energy levels.

Yoga can help you fight against stress by preventing genetic changes in the body that favor stress. Meditation is also thought to be an effective tool to prevent age-related cognitive decline, which manifests itself as dementia or Alzheimer’s disease.

According to a recent study, practicing yoga can help keep the brain healthy and youthful in the long run. However, the study was just based on observations and therefore, did not explain the causality. Nevertheless, the research helped understand ‘how’ and ‘why’ the phenomenon occurs.

The research, led by Michael Melnychuk of the Trinity College Institute of Neuroscience in Dublin, Ireland, discovered some neurophysiological reactions occurring in the body due to breathing-centered mediation.

In this paper, which was published in the journal Psychophysiology, the researchers demonstrated that how controlled breathing influenced the levels of a neurotransmitter – noradrenaline – in the body. Noradrenaline is a stress hormone that is released when the body experiences some sort of danger. It escalates the heart beat and dilates the pupil when a person becomes excited.

When present in the right amount, noradrenaline was found to create new connections between brain cells. The study revolved around the changes in the levels of this hormone in a particular area of brain – the locus coeruleus. This region of the brain is involved in the production of noradrenaline and responsible for controlling attention and breathing.

In order to determine how breathing affects attention, locus coeruleus and noradrenaline, neuroimaging techniques were used in order to measure how much the pupils dilated when participants were made to perform certain cognitive tests that required greater focus. The participants’ reaction time, breathing and activity in the locus coeruleus were examined.

The researchers found that people, who had a better coupling between attention and respiration patterns, performed better in the tests than the others. Also, it was found that the activity in the locus coeruleus increased and decreased when the participants breathed in and breathed out, respectively. This simply means that attention is influenced by the cycle of respiration. It also indicates that by focusing on and regulating breathing can help in optimizing the attention levels. Also, when a person has focused attention, his breathing becomes synchronous.

This research has proved why people practicing breathing-centered yoga have sharp focus and healthier looking brains. According to Ian Robertson, the co-director of the Global Brain Health Institute at Trinity, Buddhists and yogis have learned the importance of breathing in maintaining healthier brains and have considered the breath as an important object for meditation since ages.

By observing and regulating the breath in a certain way, through pranayamas, a person can alter his arousal, emotions and attention. This research supported a strong connection that exists between steadiness of mind and breath-centered practices.

These findings can help doctors in treating people with attention deficit disorder and healthy seniors, who wish to keep their minds young and agile to prevent themselves from falling prey to mental problems like dementia and Alzheimer’s disease.