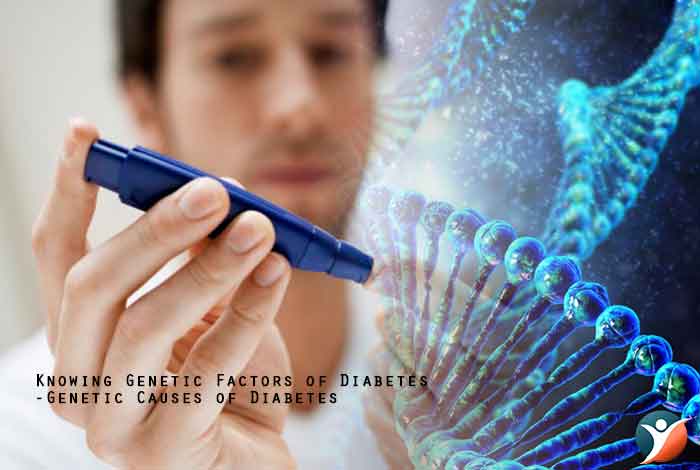 What is Type I Diabetes?

Type I diabetes is a chronic disease in which the pancreatic cells responsible for producing insulin get destroyed by the immune system. This impairs the body’s ability to produce insulin. In the absence of insulin, the body cells are unable to absorb glucose from the bloodstream where its level starts to increase beyond the normal limit. Although the actual reason is unknown, scientists believe that genetics have a role to play to play in the development of this disease. Read on to discover the genetic causes of type I diabetes. 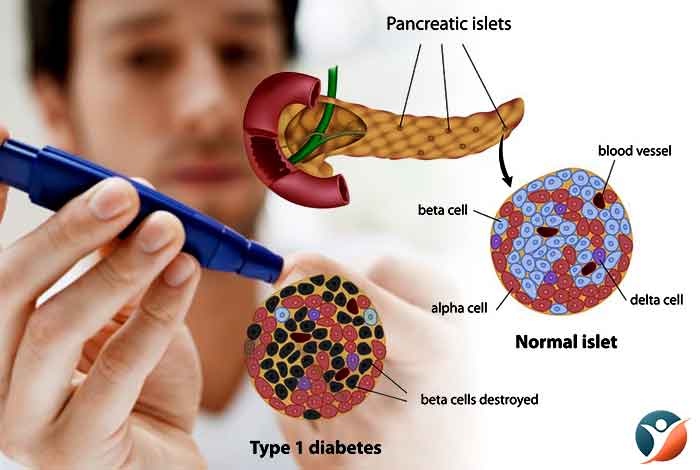 What Causes Type I Diabetes? 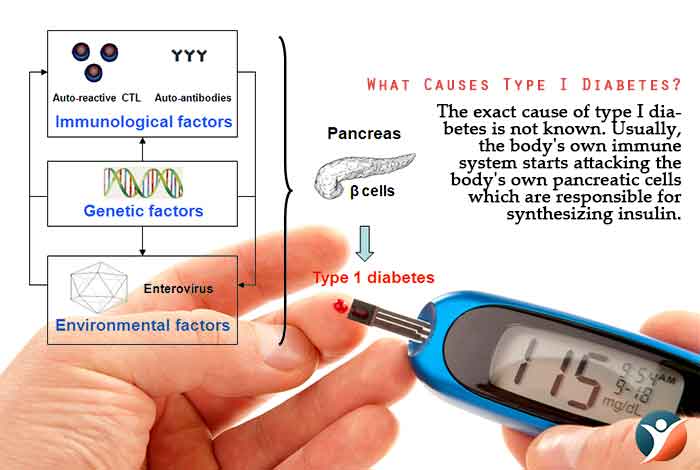 Genetic Causes of Type I Diabetes

There are a number of genes that have been identified for causing type I diabetes. The place at which these genes are located is called inherited susceptibility loci. At present there are at least 20 insulin-dependent diabetes mellitus (IDDM) susceptibility loci. Following are the most important loci:

It is estimated that nearly 40-50% of the risk of developing type I diabetes is associated with the IDDM 1 loci or MHC complex. The MHC genes that are most commonly associated with diabetes in white people are called human leukocyte antigens HLA DR3 and HLA DR4. Less data is available for other racial groups and they might have different MHC gene profiles.

The IDDM 2 susceptibility locus is responsible for causing 10% of the familial risk for type I diabetes.

A variation in the PTPN 22 gene locus is responsible for causing less than 10% of the cases of type I diabetes.

There are a number of autoimmune diseases that are associated with type I diabetes like: 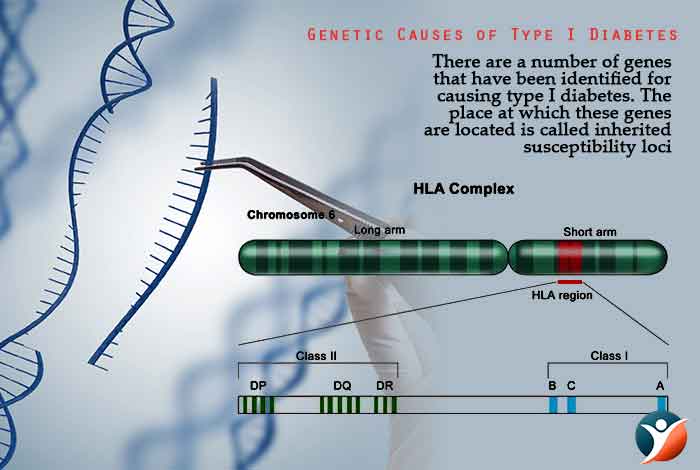 Risk Factors of Diabetes Type I

If anyone in the family suffers from type I diabetes, people often wonder whether their future generations will also develop this disease. Although a lot of research has been in this field, there are a number of questions that still need answers.

For more than 20 years, researchers at the Epidemiology and Genetic Section at Joslin in Boston have studied the incidence and hereditary nature of type I diabetes in several generations of families suffering from this disease. They have made the following observations:

If a common relative like parent or sibling has type I diabetes, the chances of a person increases by nearly 10-20% as compared to a person born in a general family.

If one child in the family develops type I diabetes, there is a risk of 10% that the other siblings will develop diabetes by the time they reach 50.

If one of the parents developed type I diabetes before celebrating his 11th birthday, the risk for his/her child developing the disease becomes slightly higher.

Nearly 1 in 7 people with type I diabetes have a condition known as type 2 polyglandular autoimmune syndrome along with several other conditions like thyroid disease and malfunctioning adrenal gland. As per the American Diabetes Association (ADA), the chances of a child developing the syndrome becomes as high as 50% if either or both of his parents have this syndrome.

Caucasians are at a higher risk of developing type I diabetes than other races. The exact reason why this difference occurs is still not clear. It might be due to difference in environmental conditions or genetics. It is observed that even among Caucasians or whites, most people who are susceptible do not ultimately develop the disease. Therefore, scientists are evaluating the environmental conditions that might be causing this difference. Genes that influence the function of immune system are more closely linked to increasing th susceptibility of type I diabetes, irrespective of the race. One such gene is HLA-DR. It is observed that most of the Caucasians with diabetes carry the gene variant 3 and/or 4 of the gene HLA-DR. In the Black population, HLA-DR7 plays an important role in developing diabetes while in Japanese, it is the HLA-DR9 gene.

Among Caucasians, the risk of diabetes is found to vary geographically.  Generally, the risk is higher in Northern Europeans than Southern Europeans. Some people might blame the climate for this difference. However, Sardinia in the Mediterranean shows opposite result. Asians have a much lower incidence of type I diabetes. However, Japan is seeing an unprecedented increase in the number of people suffering from type I diabetes. As the gene pool does not change much within one generation, environmental and behavioral factors are thought be more likely to cause this change.

It is observed that temporal clusters of type I diabetes cases have been increasing which indicate environmental influence. Temporal cluster cases are those that occur around the same time period, whether within families, school or a particular geographical area. However, no accurate reason could be found out for the occurrence of these cases. Therefore, it is impossible to rule out co-incidence in these cases. Since development of diabetes takes a long time, it is more likely a mere chance that cluster cases are being observed than a common cause being responsible for it. It takes a lot of time for the immune system to destroy the insulin producing beta cells of the pancreas. People can have their immune destroying their pancreatic cells for years without developing diabetes. As far as an outbreak in school is concerned, it is merely an outcome of chance that these youngsters develop diabetes. Their body’s immune system started destroying the body’s cells together and lead to development of diabetes. It is only a matter o0f chance that such a rare thing could develop.

Trauma is also thought to result in diabetes because the body’s requirement of insulin is increased at the time of trauma. This increase in demand strains insulin production in the body. However, the trauma itself is not responsible for causing diabetes.

A lot has been said about the possible link between coxsackie virus and triggering of type I diabetes. However, the exact relation between the virus and disease is not understood completely.

Some scientists also believe that breast feeding in the early days might play a role in development of type I diabetes. Babies who were not breast fed for a long time were at a higher risk of developing type I diabetes than those who were. Although the exact mechanism is not understood completely. 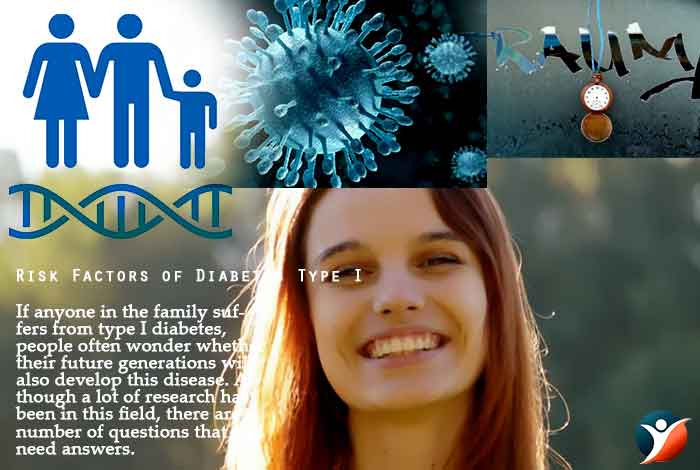 Is Type I Diabetes Hereditary in Nature?

There indeed is a risk of passing down type I diabetes through the family tree. It has been observed that children have a 5-6% risk of developing the disease if their father is a patient of type I diabetes and a chance of 3-4% if the mother is diseased. It is believed that some of the mother’s genetic material gets activated when it is passed on to the child, thereby explaining the difference in the child’s risk of developing diabetes. If a sibling has type I diabetes, the risk becomes 5-6 %. However, if the sibling has identical major histocompatibility complex haplotypes, the risk further increases. If one twin has diabetes, the chances if the other twin developing the disease increases by 40%. Recent researches have pointed out that this risk might be even higher for the other twin. 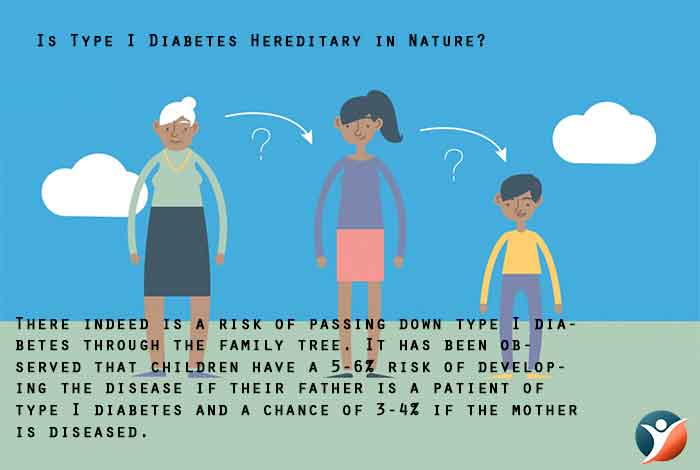 Reducing the Risk of Passing Down Type I Diabetes

Although researchers have not mapped out all the genetic reasons of type I diabetes, however, people who know that they are at a high risk of passing down the disease to their offspring can take some precautions to reduce this risk.

Mothers who are concerned that their child might develop type I diabetes should breast feed her baby exclusively till the baby is 6 months old as advised by the American Academy of Pediatrics.

People concerned about passing on their gene to their children should undergo genetic testing and those who are at a higher risk of developing this disease should make changes in their lifestyle.

People should exercise for nearly 30 minutes daily at least 5 times a week.

People should try to eat in several small meals that promote the feeling of fullness and avoid overeating. People should include a lot of fiber in their diet which will keep the blood glucose level in check.

People at a high risk of diabetes should regularly check their blood glucose levels and look up the symptoms of diabetes. 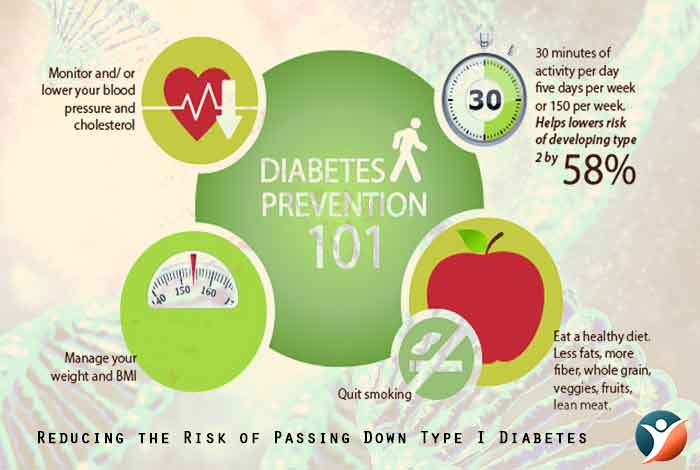 Scientists have been working tirelessly in finding a substantial cure for the disease. Although there is a lot of uncertainty associated with the exact cause of type I diabetes, scientists have now made a breakthrough in identifying a specific mutation in the gene that is thought to be responsible for causing the disease. Scientists found out an Israeli family in which 4 members suffered from type I diabetes. After combing through their genome, scientists discovered a mutation in the gene SIRT1. The interesting fact about this gene is that it is thought to be responsible for prolonging life probably by preventing cancer and cardiovascular diseases. Further research showed that a mutation in the gene lead to production of faulty sirtuin protein which played a role in the development of auto immune disease. These proteins were found to affect cytokines that regulate the immune system in the body. The scientists concluded that a mutated sirtulin protein causes destruction of wrong cell types which leads to development of auto immune diseases, type I diabetes.

The scientists tested non-diabetic as well as diabetic members of the family for their responsiveness to certain factors that are thought to cause auto immune disease. They discovered that the diseased members showed increased sensitivity to those factors as compared to other members. 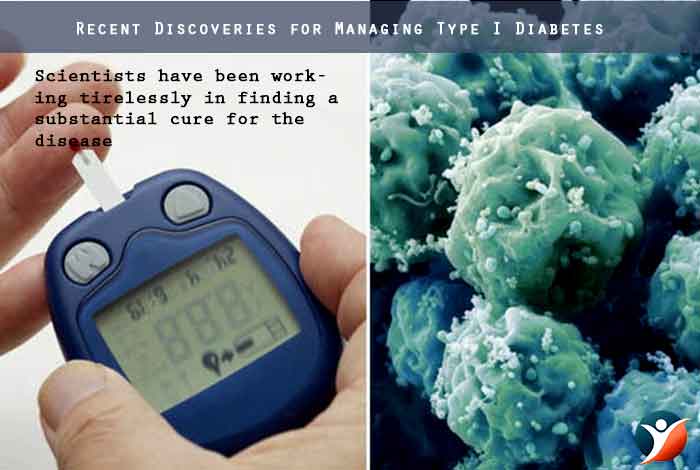 Gene Therapy for Type I Diabetes

Researchers claim to have discovered a way to restore normal blood glucose levels in mouse model with type I diabetes. This treatment plan can even be used for treating type I and even type II diabetes patients. Scientists at the University of Pittsburgh School of Medicine in Pennsylvania led the study and determined a way to treat the auto immune disease that affects nearly 1.25 million children and adults in the U.S. This treatment method is based on restoring function of beta cells which will in turn bring the insulin level and therefore blood glucose level back to normal. The only challenge that remains in this therapy is that the new cells also have a chance to be destroyed by the immune system.

The team engineered a vector that was programmed to deliver two proteins, namely Pdx1 and MafA to the pancreas which ultimately promoted beta cell proliferation, function and maturation. Through this therapy, alpha cells were successfully transformed into insulin producing beta cells. 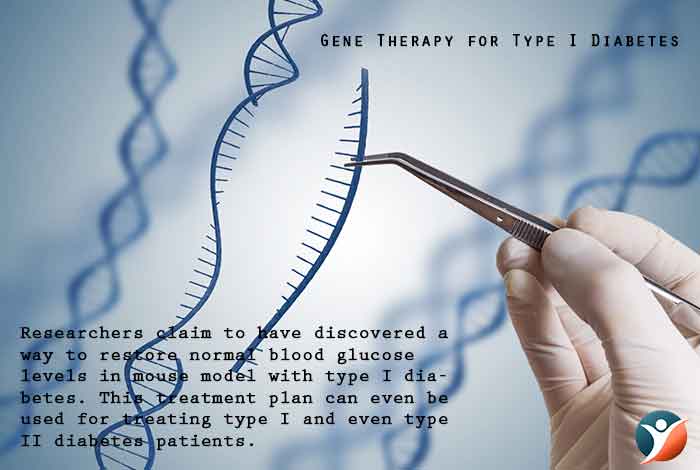 With the recent advancements happening every day in the medical field, the day is not far away when we will decode the mystery surrounding the genetic reasons behind type I diabetes.