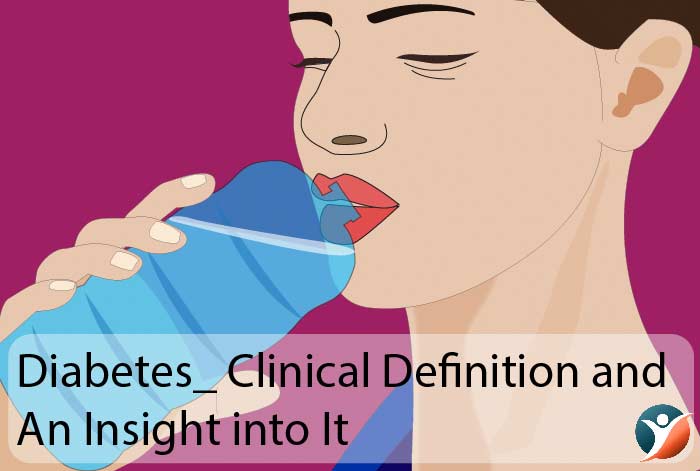 Are you constantly worried that you might also develop diabetes sooner or later because it runs in your family? Or do you find yourself scrolling down the Internet to find all the conspicuous causes that might lead to diabetes? Well, knowing all that can cause diabetes might help you in both preventing and managing it if you are already a diabetic.

We bring to you a comprehensive guide on what diabetes really is and what would or might cause it. The article covers everything you have been looking for elsewhere. Read on to know clinical definition of diabetes and also what are the causes that might lead to different types of diabetes.

We assure you that with this information, you will be able to keep your blood sugar levels in check and might also be successful in preventing diabetes altogether. Let’s see how scientists and medical professionals define diabetes.

Diabetes: Clinical Definition and An Insight into It

Diabetes Mellitus is a carbohydrate metabolism disorder wherein the body is either unable to produce insulin or cannot effectively respond to insulin. The body thus becomes incapable of maintaining proper sugar (glucose) levels in the blood.

In scientific terms, it is a heterogeneous metabolic disorder which is characterized by the presence of hyperglycemia caused by defective insulin action or ineffective insulin secretion or maybe both. The chronic hyperglycemia due to diabetes can lead to several microvascular complications which can potentially affect the kidneys, eyes and nerves while simultaneously increasing the risk of developing cardiovascular diseases.

Diabetes is, therefore, a major cause of mortality and morbidity due to the complications associated with uncontrolled and unmanaged diabetes.

Let’s learn more about diabetes and its types.

Insulin is a hormone secreted by the beta cells. These cells are located within clusters of cells present in the pancreas, known as the islets of Langerhans. Insulin’s primary role is to trigger the body cells to take up glucose as an energy-yielding fuel. Diabetics might either have dysfunctional beta cells or their muscles and adipose cells might be resistant to insulin effects eventually resulting in reduced insulin secretion or hampered glucose metabolization respectively. In both these cases, the levels of sugar or glucose in the blood increase, resulting in hyperglycemia or a high blood sugar. As glucose keeps on accumulating in the blood, this excess sugar is excreted through the urine. Because of higher quantities of glucose in the urine, water is excreted in larger quantities along with it. This causes an increase in the urinary volume and the frequency of urination. Eventually, you will feel thirstier.

Broadly speaking, there are two types of diabetes mellitus:

Type 1 diabetes is usually due to autoimmune destruction of the islets of Langerhans, located in the pancreas which significantly decreases insulin secretion.

Type 2 diabetes is strongly linked with obesity and is a consequence of insulin deficiency and insulin resistance.

In some women during pregnancy, blood glucose levels increase leading to Gestational diabetes which is just a temporary health condition. Generally, sugar levels return to normal after childbirth.

With this, let’s get straight into what causes diabetes. 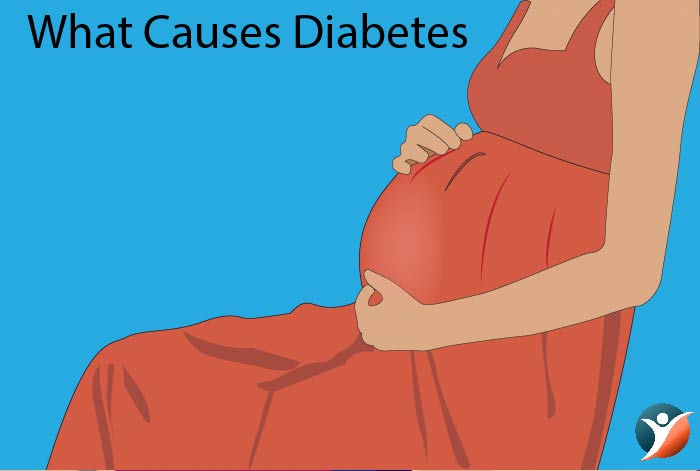 Diabetes can be caused by myriad of factors including your family history, genetic makeup, overall health, ethnicity and environmental factors. Generally, the causes of diabetes vary depending on the type of diabetes and age of the individual.

Type-1 Diabetes Mellitus is caused when body’s immune system starts destroying its own insulin-producing cells. This leaves the body with very less or no insulin to work properly. While there are no specific causes that lead to development of type-1 diabetes, the below mentioned causes might be majorly involved. 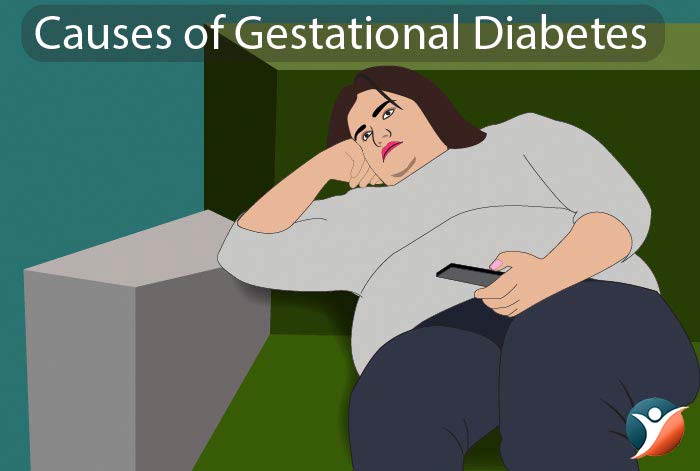 We have summed up all the major causes that can possibly lead to all major types of diabetes. While, you might be surprised to know that there are many other handful of causes that can lead to diabetes as well.

Other Causes of Diabetes: 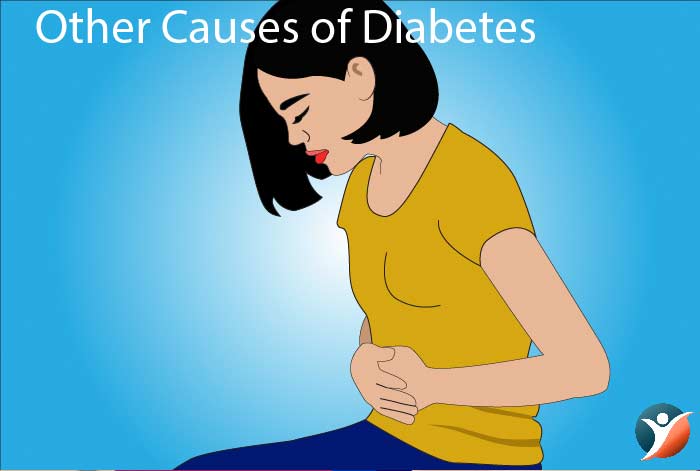 A variety of other causes might also lead to diabetes. Let’s learn what are these causes.

Diabetes insipidus can be caused by various conditions, including the below mentioned:

Some lifestyle choices which are strongly linked to predisposition towards diabetes :

Believe it or not, there are seemingly unrelated reasons that can lead to diabetes, especially type-2diabetes. Let’s get straight into these causes.

Going gluten-free might be a diet fad but a study[1] reveals that consumption of gluten-free diets might lead to type-2 diabetes. This is probably because of lack of fiber-rich whole grains which improve insulin sensitivity.

Cutting back on your coffee might lead to diabetes. If you cut your coffee consumption by one cup each day you increase your risk of diabetes by almost 17%. Whereas, if you add an extra cup of coffee each day, you lower your diabetes risk by 11%.

While you might like to spend the day all with yourself, you might never realize that you are increasing your diabetes risk. Social isolation can lead to type-2 diabetes and middle-aged women at maximum risk.

Love going crazy with your salt shaker? Well, excess sodium consumption is associated with hypertension and obesity. Every 1,000 mg of extra sodium consumed increases your diabetes risk by 43%.

If you are taking statins to lower your cholesterol levels, you are increasing your risk of diabetes by around 36%. Other medications like diuretics, seizure medications, HIV medications, psychiatric drugs, and glucocorticoids can potentially lead to diabetes development.

This is weird but rinsing your mouth twice daily with a mouthwash increases your risk of diabetes by almost 55% as compared to those who don’t use mouthwash.

In some individuals, for unknown reasons, the liver produces glucose and releases it in the bloodstream whenever it gets signal from pancreas produce glucose. This might lead to diabetes.

Love binge-watching your favorite rom-com series? According to a research conducted at Harvard School of Public Health binge watching T.V. for two more hours long-term can increase your risk of diabetes by almost 20%.

Sleep disturbances and sleep issues can also increase your risk of diabetes. As it causes significant changes in glucose metabolism, autonomic nervous system activity, hormone levels, all of which can possibly lead to diabetes.

Certain toxins and chemicals including arsenic, dioxin and other chemicals used in rat poisons might trigger diabetes development and progression.

Not fond of probiotics? Skipping foods rich in protein might cause diabetes as you have more bad bacteria in your body than good ones. These bad bacteria cause a sort of inflammatory havoc in your body resulting in insulin resistance and eventually diabetes.

A Spanish study has revealed that getting too less of sunlight might lead to diabetes due to lack of vitamin D. This is probably because the pancreas requires vitamin D to work efficiently. It is time to spend some time in sunlight as well. Though, never forget your sunscreens.

Always Stressed like crazy? A study has revealed that you are at high risk of type-2 diabetes, if stress is regular guest in your life. Stress can increase cortisol levels in your body thereby significantly messing with your blood sugar levels. Try relaxation and recreational activities to keep your stress levels under check.

Do you skip your breakfast every other day? If it is a yes, you are creating perfect environment for your body to develop type-2 diabetes. Whenever you deprive your body of food, your insulin levels are significantly disrupted and this might lead to diabetes in long-run.

While all these causes might lead to diabetes but most of them are easily controllable and you can therefore easily reduce your risk of developing diabetes.

With this, we would like to tell you about the complications you can expect if you don’t control or manage your diabetes effectively. These include:

These complications make it even more important to both manage and prevent diabetes.

Afraid of developing diabetes? Well, don’t be. To both prevent and manage diabetes, you must know what it is all about and what it can do to your body. It is indeed important to know the probable causes of diabetes, so that you can try to avoid as many of them, as possible.

We hope that you would work towards a diabetes-free life. If that is not easy, it is not even impossible to prevent diabetes and keep your blood sugar levels in control. We believe that our article has answered all the questions you had about diabetes and especially its causes.

Did you enjoy reading the article? Did you come across any new causes of diabetes that you were not aware of? We would like to hear more from you. For any other details you wish to share or feedback, feel free to comment below. We look forward to sharing more such causes that might lead to diabetes, soon with you.