Turmeric, the latest ‘Super Food,’ is a yellow colored spice with pungent flavor. It finds its mention in scriptures of Ayurveda, the ancient medical literature of the Indian subcontinent. With globalization, this spice has reached every nook and corner of the world, establishing itself as the ‘King of spices.’  Due to increasing awareness about health benefits associated with turmeric, such as helping the body to fight inflammation, defending against Alzheimer’s, detoxification and above all, preventing cancer, there has been a humongous increase in its global sales.

Recent interest in this wonder spice stems from the research done at the National Center for Complementary and Integrative Health (NCCIH). However, according to Craig Hopp, deputy director at NCCIH, there is still some lack of evidence regarding the efficacy of turmeric for treating any health condition.

Health benefits of turmeric are attributed mainly to its constituent, known as curcumin, which imparts anti-inflammatory antioxidant, anticancer and antibacterial properties to the same. Curcumin is believed to activate pathways that make the cancer cells die prematurely by blocking growth, division and multiplication of the same. It only affects cancer cells without affecting the healthy ones.

Curcumin is known to block certain trigger factors, responsible for inflammation and therefore, possesses anti-inflammatory properties. Several studies claim that It is shown to relieve pain in arthritis as much as ibuprofen. It also improves high-density lipoprotein (HDL) or ‘good cholesterol’ levels and decreases low-density lipoprotein (LDL) or ‘bad cholesterol’ levels in the blood.

Further studies are being done to fully understand the role of turmeric in preventing and/or treating various ailments like:

All parts of turmeric plant do not contain curcumin and other medically beneficial compounds in equal concentration; hence, the researchers are in a fix whether to consider curcumin alone or the mixture of chemical compounds in turmeric responsible for medical benefits.

Curcumin is not absorbed readily by the body and hence, to get its decent concentration in the blood, a lot of turmeric needs to be ingested. This can be improved by taking turmeric with oil or with black pepper which contains piperine. Therefore, curcumin supplements are mixed with piperine to enhance gut absorption of curcumin.

Recently, ‘nanoparticles – particles of size between 1 and 100 nanometers –containing curcumin have been created to improve its absorption and target cancer cells.

Turmeric Consumption and Its Side Effects

Consumption of turmeric even up to 1200 milligram a day is considered safe when taken orally or through skin. However, it can be fatal if injected. A daily dose of 500 milligrams twice a day is generally prescribed.

Consuming large amounts of turmeric or using it as a supplement for a long time can show some side effects, such as nausea and diarrhea. People with gallstones or those, who are on medications like sulfasalazine, should be careful while taking turmeric supplements. 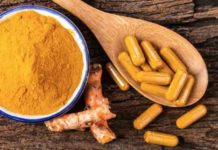 Why You Should Include Turmeric in Your Diet

Pain is a common human condition. It is essentially a warning or an indication of something is wrong around or inside us and that we should avoid such situations...