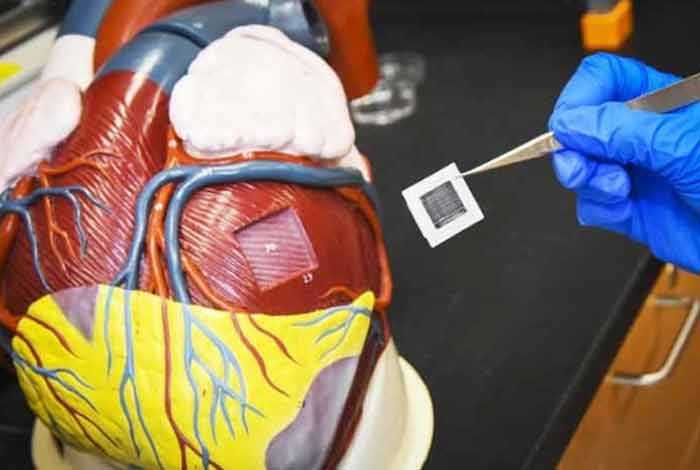 Each of the patch is 1.57 by 0.79 inches in size, and as thick as a dime. When two of these patches were transplanted onto the infarcted area of a pig heart, it significantly improved the function of the left ventricle — the major pumping chamber of the heart.

The patches were also found to reduce the infarct size (area of dead cardiac muscle), heart muscle enlargement and heart-muscle wall stress. It also decreased apoptosis (programmed cell death) in the scar border area surrounding the dead heart muscle. Moreover, the patches did not induce arrhythmia, a condition characterized by irregular or abnormal rhythm of heart, which is a general complication arising in other biomedical engineering approaches used to treat heart attacks.

The patch is made of a mixture of three cell types:

These three cell types were differentiated from human-induced pluripotent stem cells (hiPSCs) of cardiac lineage rather than from skin cells or other cells types.
A three-dimensional fibrin matrix, rocking back and forth, was used to grow these patches. After a day, these cells began to beat synchronously.

Dynamic rocking of the three cell types produced more cardiac muscles that were more mature with superior physiological function and contractive force as compared to those that were not dynamically rocked. These patches showed resemblance with the native heart muscle tissue in terms of physiological and contractile properties.

In the past, an injection of hiPSCs or hiPSC cells grown as a very thin layer was given, which showed very low rates of survival or engraftment. The present study showed a higher rate of engraftment of 10.9%, four weeks after transplantation, leading to improved heart recovery.

Exosomes – extracellular vesicles released from cells that carry proteins and RNA from one cell to other as a common cell to cell signaling method – are thought to have an additional benefit in the patch. During the study, it was found that the exosomes released from the large heart patches increased the survival of cardiac muscle cells.

Furthermore, the patches are thought to prevent or reverse detrimental changes occurring during protein phosphorylation in the sacromeres of the cardiac muscle tissue lining the infarcted area of the heart. This result is the first evidence suggesting that hiPSC-derived cardiac cells might improve contractile function of the heart after a heart attack by decreasing the abnormal changes in phosphorylation states of sacromere proteins that form the contractile unit in the cardiac muscle cell – myofibril. 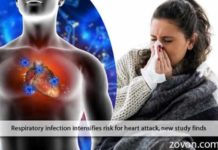 Respiratory disease or infection may result in increased risk of heart attack, a recent study claimed. However, the overall risk associated with a single instance of respiratory infection is...