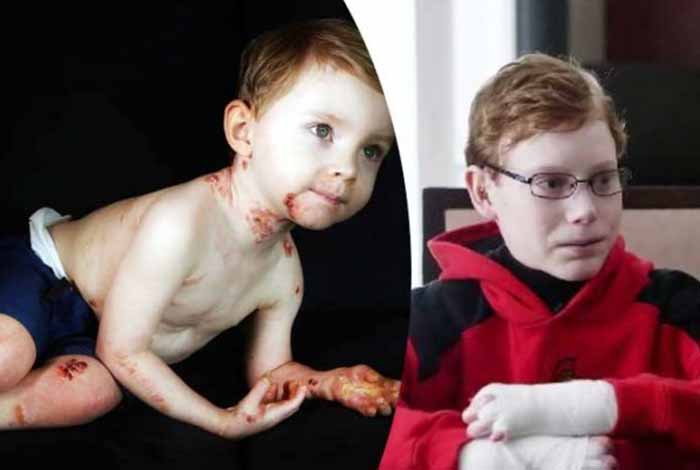 A medical team at the Ruhr-Universität Bochum’s burn unit and the Center of Regenerative Medicine at the University of Modena (Italy) have, for the first time ever, successfully treated a child suffering from extensive skin damage by using gene therapy, which involved transplanting genetically modified stem cells onto the wounds. The boy is being called “Butterfly child.’ He was suffering from epidermolysis bullosa, a genetic disease, in which nearly 80% of his epidermis had been destroyed.

When all the established therapies failed to provide relief to the suffering child, the medical team from Bochum decided to go for an experimental approach of grafting genetically modified stem cells on to wound surfaces. Now, two years after the successful therapy, the boy is leading a normal family and social life.

Epidermolysis bullosa refers to a congenital skin disease, which is currently being considered as life threatening. A seven-year-old boy, named Hassan, had lost nearly 60% of his epidermis when he was admitted to the intensive care unit of Katholisches Klinikum Bochum in June 2015. He had severe sepsis with high fever and his body weight was merely 17 kg; all pointing to a life-threatening condition. All prototype therapies eventually failed.

Due to poor prognosis, the medical team opted to go for the experimental therapy of transplanting genetically modified stem cells. These stem cells were obtained from the patient through skin biopsy. These cells, processed in Modena, had the intact gene transferred into their genome, using retro-viral vectors that are virus particles, especially modified for transferring gene. These genetically modified stem cells were cultivated in a clean room laboratory and were turned into transgenic transplants. After obtaining the necessary permissions, transplantation was performed.

Overall, 0.94 square meter of transgenic epidermis was applied on to the patient’s arms and legs, flanks, entire back, and partially to his neck, stomach and face; accounting for nearly 80% of his body surface.

After the transplantation, the patient’s transgenic stem cells began forming the new epidermis by binding with the proteins in all the transplanted area. Therefore, transferring retro-viral gene into the genome of epidermal cells of a patient was proved to be successful and gave stable outputs.

Today, the patient has a high-quality, stress-resistant skin with an intact hydrolipid film and early formations of hair. There are no scar contractures found on the transplanted area. The social life stolen away from the child due to the disease is now returned to him.

Hassan is the first patient in the world to have received this innovative therapy on such a large body surface. This therapy carries a huge potential for researching into and developing new therapies for treating diseases like epidermolysis bullosa and traumas leading to large skin defects.