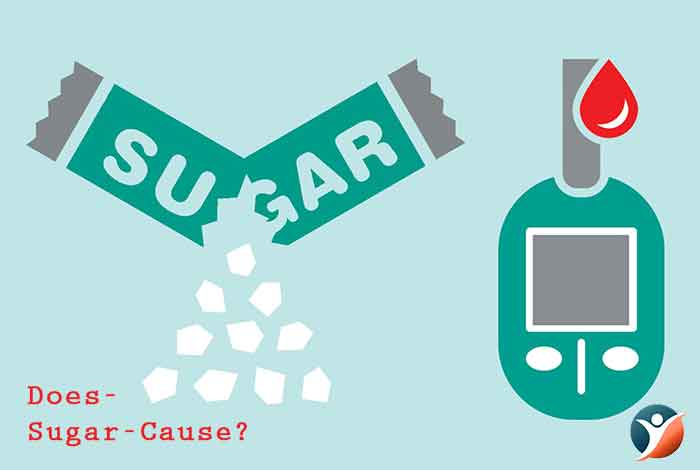 Maturity Onset Diabetes of the Young (MODY) is a rare form of diabetes that has been found to have a strong genetic background and runs in the families. It is caused due to a mutation in a single gene of an autosomal chromosome which is passed on from generation to generation. If a parent has this mutation, there is a 50% chance that his/her offspring will get this gene. If an offspring inherits this gene, there is a probability that he will develop diabetes before reaching the age of 25 years, irrespective of his lifestyle, weight and ethnicity. It is a heterogeneous group of disorders that is MODY is different from both type I and type II diabetes. However, the disease is so rare in its occurrence that it is often misdiagnosed for type I or Type II in the beginning.

Some of the key features of MODY are as follows: 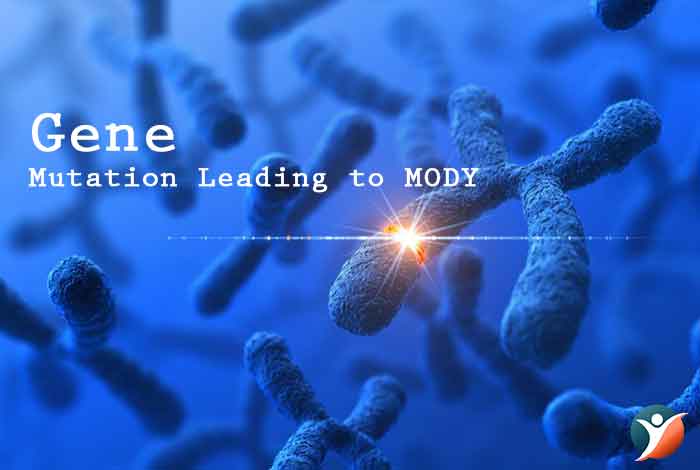 There are a number of gene mutations that cause MODY, all of which disable the pancreas from synthesizing a hormone known as insulin. In the absence of this hormone, the blood glucose level increases. This happens because insulin helps the cells in taking up glucose from the blood and using it for producing energy. When insulin is not present, there is surplus glucose in the blood which can seriously damage the kidneys, eyes, blood vessels and nerves.

Clinical manifestations of MODY depend on the type of mutation that occurs in the gene. Some people develop a slightly high level of blood glucose that remains constant throughout the life, develop no or mild symptoms of diabetes and have no long-term complications due to the disease. Their elevated blood glucose levels can only be determined during a routine checkup. However, several other mutations require a more specific treatment regimen either with insulin or anti-diabetes medicines.[1]

The most commonly observed types of MODY include.[3]

This gene is known to cause nearly 70% of the cases of MODY. It is responsible for causing diabetes by decreasing the amount of insulin synthesized by pancreas. In these people, diabetes generally develops when they are in their adolescence or early twenties. These people generally do not require insulin to treat their condition and can manage their symptoms with the help of anti-diabetics.’ medicines.

This form is not as common as other types of MODY. People who inherit this gene mutation are more likely to have a birth weight of 9lb or more. These babies might develop low blood sugar at the time of birth or soon after the birth which might require an immediate medical help. Some people get better with anti-diabetic medicines and others might require insulin therapy.

People with this type of MODY can develop a number of problems, including uterine abnormalities, renal cysts, gout and even diabetes. Renal cysts can be detected in the womb itself before the baby is born. Diabetes develops later in life and the person generally requires insulin therapy for managing the disease. Along with it, he is required to follow a healthy diet and indulge in regular physical exercise. People with HNF1-beta are at a higher risk of developing complications due to diabetes.

Insulin Promoter Factor 1, also known as PDX-1 is a gene that controls the growth and development of beta cells of the pancreas. This gene is also involved in activating the gene coding for insulin. 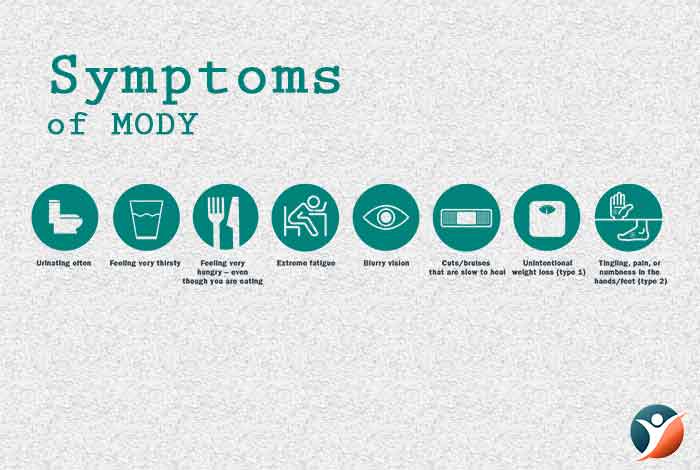 Symptoms of MODY depends on the type of MODY. Many people with MODY have hyperglycemia for several years before they develop the symptoms of MODY and get diagnosed. Generally, these people get diagnosed accidentally during routine checkup. In the early stages of the disease, there might be no symptoms. However, in the absence of treatment, the blood glucose level continues to increase that eventually causes the following symptoms to develop.[4]

Increased blood glucose causes the fluids to move out from the cells which cause an increased sense of thirst.

Rise in blood glucose levels causes the fluids to move out from the cells and makes the person feel thirstier. When the input of fluid increases, the urine output increases. The increased frequency of urination is observed during day and night.

In diabetes, there is an elevation in the level of glucose in the blood but the cells of body are unable to use insulin. The cells are deprived of energy source and therefore, the patient feels hungrier.

Since the glucose is not utilized efficiently and spills into urine from blood. This leads to a loss of nutrients from the body and weight loss.

Increased blood glucose level in the blood causes loss of fluid from the lenses of the eyes which affects the ability to focus and see.

Some of the other symptoms that are seen in MODY patient are dry and itchy skin, drowsiness and fatigue. In other types of MODY like MODY5, other organ apart from pancreas like kidneys get affected. In some of the cases of MODY5, kidney disease might get diagnosed before diabetes. 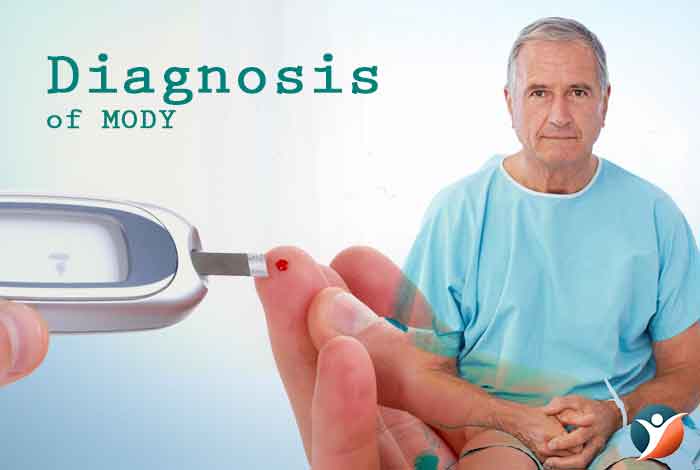 Generally, diagnosis of MODY requires genetic testing. In this, a blood sample is drawn and analyzed for the presence of gene mutation. It usually takes 4-8 weeks for the results to come. In some of the cases, results can be obtained in a shorter period of time. Sometimes, in place of blood sample, a mouth swab can also be taken for genetic testing. Otherwise, in most of the cases, MODY is often diagnosed during a routine screening procedure for checking blood sugar levels.

Treatment of MODY (Maturity onset diabetes of the young)

Treatment for MODY is specific to the type of MODY. Some if the ways in which MODY can be managed are as follows:

It is usually treated with anti-diabetic medicine belonging to the class sulfonylureas like glyburide, lipizide and glimperide. Drugs belonging to this class work by stimulating the pancreas to produce more insuiln. Treating MODY 1 with sulfonylureas can delay the initiation of insulin therapy, which will be needed sometime down the line in order to have complete control over the disease.

it is a rather milder form of MODY and often goes untreated with neither the medicines nor insulin, except during pregnancy where it is extremely important to monitor blood glucose levels. MODY2 patients can keep their blood glucose levels in check through diet and exercise.

People having MODY3 respond well to the drugs belonging to class sulfonylureas, which can delay the initiation of insulin therapy.

The line of treatment for these patients also involves use of drugs belonging to the class sulphonylureas.

these, as well as other rarer forms of MODY commonly, require insulin treatment within a short period of diagnosis. IN MODY5, people also develop kidney cysts and other such disorders which should also be treated.

Apart from MODY2, all other forms of MODY carry severe risks of developing some or the other complication like nerve damage, heart disease, eye involvement and kidney disease. These complications are also seen with type I and type II diabetes. Therefore, these patients are required to keep their glucose levels in check.

Difference between MODY, Type I and Type II Diabetes

Who Should Be Tested For MODY?

Following people should get themselves tested for the presence of MODY so that proper treatment can be initiated:

Lifestyle changes are an important aspect that can help in managing MODY. Some of the lifestyle modifications that are recommended for keeping blood glucose levels in check include:

MODY Patients should aim to keep their BMI in a healthy range of 18.5-24.9. If the patient is overweight or obese, he should try to get rid of the extra pounds.

Healthy diet is extremely important for keeping blood glucose levels in check. Patients should include the following food item in their diet:

The following foods should be avoided;

Patients should watch their portion size and calorie intake as it impairs blood glucose control and causes an increase in the body weight. Even excessive intake of proteins should be avoided. 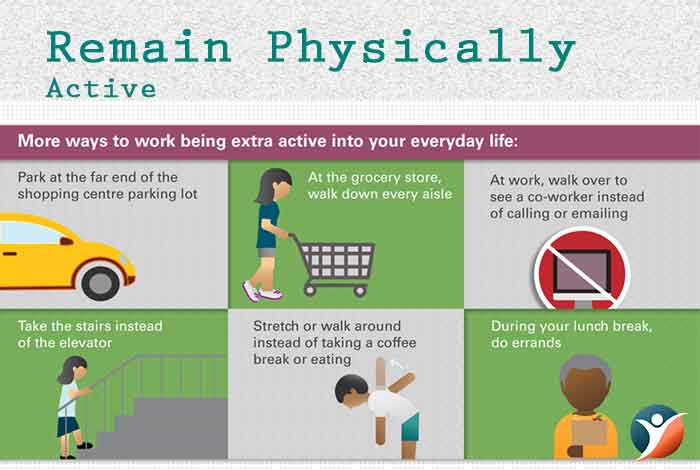 Moderate physical activity for 30m minutes on a regular basis is more than enough to keep blood glucose levels in check and promote a healthy wellbeing.