Some studies say that weed mars our thinking ability, capability to organize and pay attention. And generally, it is not related to motivation, drive, and productivity.

A study [1]  also revealed that cannabis use has been associated with impaired cognition. However, some people feel that it boosts focus and productivity. Yes, you heard it right! Some people report that smoking or consuming weed makes them more alert. But there is no scientific backing that cannabis works on the parts of the brain associated with motivation.

Larissa Mooney, addiction psychiatrist, says that people claim that they have accomplished tasks and followed through on them by smoking weed.

Companies that sell weed and sites that review cannabis have spread the notion that marijuana can increase productivity and boost clarity although there are no studies behind this.

So, what’s with the whole idea that cannabis boosts productivity for tasks like organizing the room or cleaning the floor? Weed could be enhancing the motivation even if there is no direct relation between productivity and weed.

Andrei Derbenev, associate professor of physiology at the Tulane University School of Medicine, said that it is a common belief that cannabis can promote focus or productivity, but it has been studied and in fact it has just the opposite effect [2]

Most of the research says that cannabis and motivation are not related. But some researches also talk about motivation getting reduced with consumption of weed. John Salamone, a psychopharmacologist, says that there is no association of focus and attention with smoking weed.

Derbenev adds that cannabis may have an indirect effect. He says that cannabis could increase focus on some tasks by reducing physical or mental pain. Feeling better or having no pain could give a perception of increased focus and motivation. But it is only a person’s perception. Some people may feel better during intoxication as they may experience more energy or euphoria.

Mooney says that many drugs that are used on an everyday basis can result in a euphoric high and have similar effect. For example, many people would have the same feeling after drinking a cup of coffee.

Using cannabis to improve focus on some tasks may work for some people. This is because drugs have different effect on different individuals. But this should not be understood as drug increasing the motivation and focus, particularly when it is known that opposite holds true. It negatively affects the organizational and planning abilities of the brain.

But there is a lot that is not understood about the use of cannabis. This is because this drug has been classified as Schedule 1 drug with the highest rate of abuse [3] . The U.S. Drug Enforcement Agency should approve a study [4] and ensure that the drug is controlled.

Mooney says that it is difficult to conduct research on cannabis as it is hard to even get the product. The U.S. Food and Drug Administration [5] says that it has not approved the drug as effective and safe for anything whatsoever. However, two similar substances that have same effects as marijuana have been approved for treatment of anorexia nervosa and AIDS-induced weight loss.

But things are turning around. Marijuana has been legalized in 30 states for medicinal and recreational purposes. Authorities now support removal of federal restrictions on cannabis so that research can be done and do something about the opioid epidemic that is sweeping away our communities.

Now, it is easier to research the effects of cannabis but there is a strong evidence against the drug promoting attention or focus. Weed generally kills productivity. But it works for some people, says Mooney and we should respect someone’s perception instead of negating it. 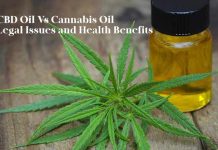 A Comprehensive Overview of CBD and Cannabis Oil: Health Benefits, Side Effects and Legal Considerations

These days, it has become more acceptable to discuss cannabis (marijuana) but still there are many apprehensions and fears regarding its use as a medicinal plant. Cannabis still happens to...