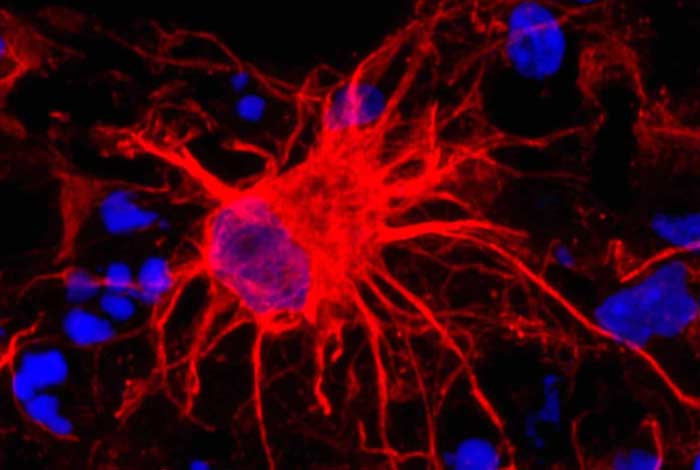 After being almost neglected, star-shaped brain cells known as astrocytes are now receiving their due attention. In order to understand brain development, scientists examined how astrocytes mature in 3D structures grown in culture dishes which resemble the human brain. According to this study, astrocytes mature at the same rate in the lab as in the human brain. This study was published by Neuron and funded by NINDS (National Institute of Neurological Disorders and Stroke).

This study brings out the role of astrocytes in both normal brain development and disease. In 2015, a study was published by a team according to which adult skin cells were taken, which were further converted into induced pluripotent stem cells (iPSCs) and then regrown as 3D clusters of brain cells known as hCSs (Human Cortical Spheroids). This represents a mini version of brain region which can be grown for several months. The cells found in these clusters grow into neurons, astrocytes as found in human brain.

Brain is difficult to study because there are different stages of development. hCSs system tries to understand brain, step by step. Astrocytes were grown by hCSs method, develop at the same rate as in human brains.

In a new study, Steven Sloan performed an experiment. He compared astrocytes from hCSs to those found in the adult brain. This study was carried out for 20 months. It has been found that lab-grown cells change in a similar manner as directly taken from brain tissue. The process is important for brain development and any deviations from these are thought to be the cause of neurological disorders like schizophrenia and autism. This method helps scientists uncover the cause of these disorders.

Dr. Pasca has said that astrocytes are just not there to keep the neurons warm, but they actually participate in the neurological functioning. A greater proportion of the brain is made up by astrocytes so if they don’t function correctly there may be greater consequences.

Researchers have cautioned that hCSs is only a model and they lack quite many features of the real brain. It was found that certain genes that are active in mature astrocytes did not switch on, in hCSs grown astrocytes. It was maybe because cells had less time to develop. To acknowledge this flaw, researchers hope to produce mature brain cells more quickly. hCSs can also be used to identify what causes astrocytes to change and to find drugs that correct neurological differences that occur in the brain.