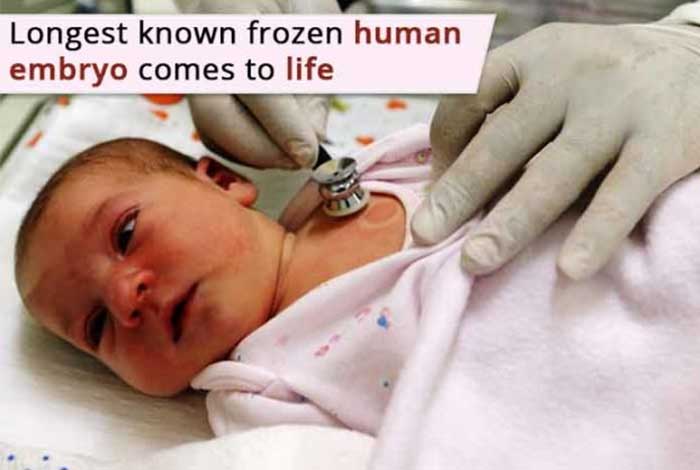 The only thing unusual about the birth of Emma Wren Gibson of Tennessee is the fact that her embryo now holds the world record of being the longest known frozen human embryo, resulting in a successful birth. These babies, being born from frozen embryos, are called ‘Snowbabies.’

Cystic fibrosis, a genetic disease, was the reason for the childlessness of Tina and Benjamin Gibson, the proud parents of Emma. Benjamin was infertile. The couple fostered several children and was planning on adopting children to complete their family when they came to know about embryo adoption. They submitted their application in August 2016 and by March 2017, Tina was implanted with three embryos donated by the same anonymous donor.

Emma Wren Gibson came into this world on November 25, 2017; 24 years after her biological parents froze her embryo at the National Embryo Donation Center in Knoxville, Tennessee. The embryo was frozen on October 14, 1992 and thawed on March 13, 2017; making it 24 years old.

The earlier record was made in 2011 when a woman in New York gave birth to a healthy baby boy from an embryo that was preserved 20 years earlier.

However, some experts suggest that this world record might not be true as there is no way of identifying the oldest known embryo resulting in a successful, live birth.

Louise Brown was the first human born out of in-vitro fertilization (IVF) process in July 1978. The success rate of IVF has increased remarkably in the past few years. According to the Center for Disease Control and Prevention (CDC), about 12% of the American women use some kind of fertility services to give birth.  The use of assisted reproductive technologies for giving birth has increased by 50% in the last decade. In 2015, 73,000 babies were born through this technique, which accounts for about 1.6% of all U.S. births.