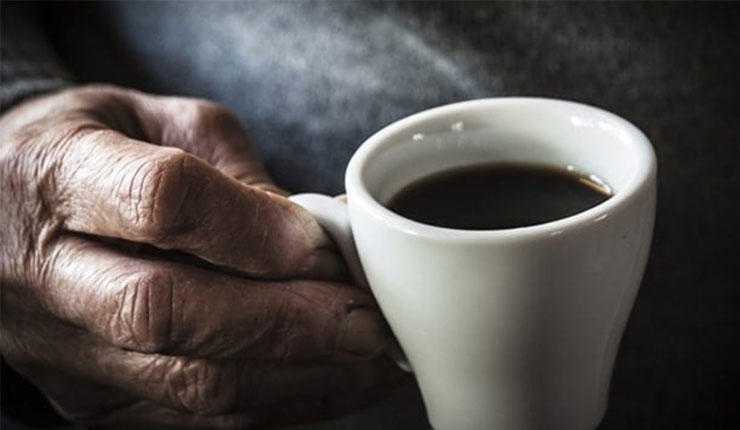 Parkinson’s Disease (PD) is a debilitating neurodegenerative disorder. The age of onset of PD is usually over 60, but it is estimated that one in 10 cases are diagnosed before the age of 50, with slightly more men than women affected.

The cardinal features of PD are the slowing down of motor function, resting tremor, muscular rigidity, gait disturbances, and postural reflex impairment. The resting tremor occurs when a person’s hands, arms, or legs shake even when they are at rest; action tremor occurs with the voluntary movement of a muscle.

The underlying pathological lesion is the progressive destruction of dopaminergic neurons in the midbrain. There is currently no available treatment to either prevent or slow down this neuronal loss and the resulting dopamine decrease in the midbrain.

Experimental and epidemiological research has focused on lifestyle, dietary and environmental risk factors, including coffee consumption. Scientists claim that caffeine may reduce the risk of Parkinson’s disease in people who have a gene mutation associated with a movement disorder. Coffee consumption appears to reduce or delay the development of PD and caffeine is most likely the causal factor. In women, however, the interaction between caffeine and hormonal therapy still needs further clarification

“It’s also possible that caffeine levels in the blood could be used as a biomarker to help identify which people with this gene will develop the disease, assuming caffeine levels remain relatively stable,” Crotty added in a news release from the journal Neurology.

Previous studies have shown that caffeine may protect against Parkinson’s in people with no genetic risk factors. This new study focused on a mutation in the LRRK2 gene that increases the risk of Parkinson’s.

Not all people with this gene mutation develop Parkinson’s disease, so scientists are trying to pinpoint other contributing genetic or environmental factors.

Could coffee — or its lack — be one of them?

The study assessed people at one point in time, so it doesn’t help researchers understand any long-term effect caffeine may have on Parkinson’s risk or how it may affect the disease’s progression, Crotty noted.

Also, the study doesn’t prove that caffeine consumption directly reduces the risk of Parkinson’s, it only shows an association.

There is some evidence that drinking coffee reduces the risk of developing Parkinson’s disease, but the effect of coffee on motor symptoms in people who already have been diagnosed with Parkinson’s is less clear.

Available data suggest that drinking coffee reduces the risk of developing Parkinson’s disease by up to 30%, in a dose-dependent manner, with most studies indicating three cups of coffee as a beneficial dose.

Scientists working with a mouse model of Parkinson’s disease have found that caffeine prevents the loss of the neurotransmitter dopamine, which is depleted in the neurodegenerative illness.

If the new findings are any indication of caffeine’s effects in humans, a coffee a day may help keep Parkinson’s away.