Scientists say that consuming painkillers while being pregnant affects the fertility of the child, who is not yet born, in the later years, when he/she will grow up. There may be a decrease in the fertility.

The study claims that the fertility of the future generations may get affected due to consumption of these drugs by affecting the DNA.

This is an addition to the growing literature and evidence that drugs like paracetamol should be used with extreme care during pregnancy.

Scientists from the University of Edinburgh in UK studied how paracetamol and ibuprofen affect the ovaries and testes of human fetus.

Results of the Study

It was found in the study that human tissues that were exposed to paracetamol or ibuprofen for a week in a dish, had decreased number of cells that produces eggs and sperm, known as germ cells.

Further, it was found that ovaries that were exposed to paracetamol had 40% lesser cells that produce eggs. On being exposed to ibuprofen, there was nearly 50% reduction in the number of egg-producing cells.

Girls produce all eggs in womb, so reduction in the number of cells could result in an untimely and early menopause as suggested by the researchers.

It is not only the girls, but the unborn boys can be affected too. The study showed that testicular tissue in a culture dish, when exposed to painkillers like ibuprofen or paracetamol, had about a quarter lesser cells that produce sperm.

The researchers also assessed the effects of these painkillers on mice which carried grafts of testicular tissues of the human fetus.

These grafts mimic the growth and function of testes while developing in the womb. The study indicated that after a day of treatment with human equivalent dose of paracetamol, cells that produce sperm in the graft tissue decreased by about 17%. And, after a week of the treatment, the number of cells reduced by two third.

Some studies that were conducted earlier found that painkillers given during pregnancy resulted in decreased germ cells in the female offspring. So, their fertility and that of the future generations got affected.

The study, covered in Environmental Health Perspectives, showed that exposure to ibuprofen or paracetamol resulted in activating mechanisms that alter the DNA structure, known as epigenetic marks.

These marks can run in families. This tells us how the effects of painkillers on fertility may be transferred to the future generations.

Scientists also found that the effect of painkillers on germ cells is caused due to their action on prostaglandins – lipid compounds that have key role to play in ovaries and testes.

So, women are advised to be careful while taking these drugs during pregnancy and follow the guidelines, i.e., taking a dose which is the lowest for the shortest possible duration.

Antidepressants During Pregnancy Linked with Improved Mental Abilities in Kids

According to a recent research, children who were subjected to or received antidepressants while still in the mother's womb scored more on tests related to mental abilities at a...

It is common to experience body aches and pains. Our first step towards getting relief from pain is to have painkillers that permanently lie in the bottom of our... 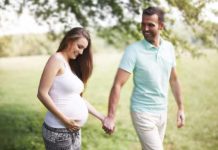 Tips for a Successful Pregnancy Experience

Preparing for becoming new parents? Well, here are a few tips by Dr. Phil McGraw on how to lay the foundation for a successful pregnancy period that will lead...

In the earlier researches, it was found that in the first trimester of the pregnancy, there is a risk of heart diseases and facial deformities, such as palate and...

A recent study indicated that women, who gained weight after their first pregnancy are more prone to develop diabetes during their next pregnancy. The rise in the weight of...

Consuming Acetaminophen during pregnancy increases the ADHD risk in kids

Acetaminophen is a painkiller drug that is most commonly prescribed to the pregnant women. But a recent study disclosed that the drug has some severe side effects as it...