Home Expert Zone Jillian Michaels Check out What You Are Eating: Chemicals in Foods That Can Harm... 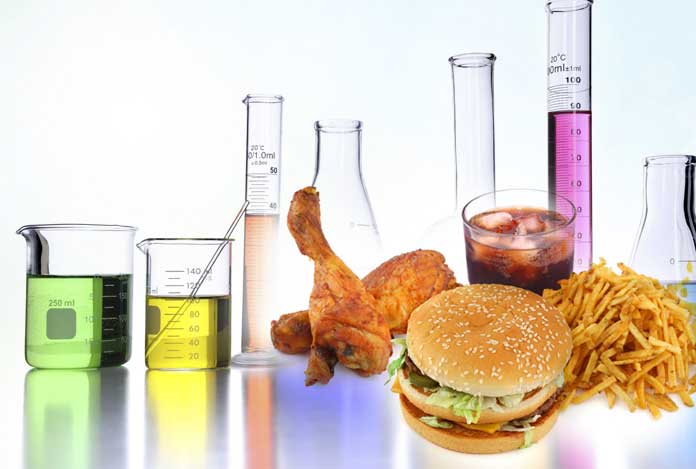 One of the major steps toward a healthy living is to start eating healthy. Consuming nutrition-rich food is the foundation of a good health. Generally, people follow the 80/20 rule while moving to a healthy diet routine. This rule refers to 80% eating clean food, while 20% hogging of delicious delicacies including all the fast food. These fast foods contain sugar, however limited consumption of sugar won’t cause much harm to the body.

But, is sugar the only thing in foods that can affect the body of a person? Well, Jillian Michaels says that eating a limited amount of sugar-containing foods can minimize its negative effects, but, if the food is processed with harmful chemicals, no matter what amount of food is consumed, it is still harmful for body. Jillian listed out these chemicals found in foods and referred to them as “pure garbage”. These are:

Hydrogenated oils are generally added to foods to enhance their taste and to preserve them from spoiling for a longer time. However, these are harmful for health because they can affect the levels of cholesterol in body, i.e., increasing the LDL (bad cholesterol) and decreasing the level of HDL (good cholesterol). Thus, trans fats can lead to various health condition such as diabetes, or other heart diseases such as coronary artery disease.

A highly refined sweetener, HFCS is a calorie dense chemical that is associated with obesity and diabetes. Moreover, it affects the cholesterol levels of the body in a similar way as trans fats do, thus leading to various health conditions.

Various artificial colors, such as red no. 40, blue nos. 1 and 2, and yellow no. 6, are linked with various health conditions such as thyroid cancer, attention-deficit/hyperactivity disorder (ADHD), chromosomal damage, etc.

Generally, people replace the jar of common sugar at their home with the small packets of artificial sweeteners like aspartame, sucralose and saccharine. But, what they don’t know is that these artificial sweeteners are harmful for health. They contain carcinogens and neurotoxins that can harm the functions of the brain.

Moreover, it contains various chemicals that can trigger the production of hormone that affects body weight. Also, they can affect the levels of serotonin, a hormone that regulates digestion, mood, and sleep cycle.

It is widely used as a flavor enhancer in various foods such as soups, frozen foods, various seasonings, etc. However, it is also known to affect the brain cells at hypothalamus, causing hyperactivity. Various studies have proven that hyperactive brain cells can increase hunger and trigger food cravings which leads to binge eating and thus affecting the body weight.

Various preservatives such as butylated hydroxytoluene (BHT) and butylated hydroxyanisole (BHA) are generally found in foods like cereals, potato chips, and even chewing-gums. These can inflict serious damage to the endocrine system of the body and can also lead to the production of cancer causing compounds in body.

These chemicals are added to various processed meats such as hot dogs, hams, and bacon in order to enhance their taste, add some color, and preserve them for a long-term use. However, these chemicals are carcinogenic nature and can badly affect the function of liver and pancreas, the organ that are responsible for the production of insulin hormone in body.

Pesticides containing foods are often linked to childhood obesity. When a person consumes foods that are immersed with pesticides that contains pesticides like dichlorophenol, especially 2.5 dichlorophenol, can inflict damage to the endocrine system of the body. Thus, it can malfunction the metabolism of body and leads to obesity.

If a person eats meat of farm animals that have been treated with antibiotics, the drugs are passed on the body of the person along with the food. This high concentration of antibiotics in body can affect the ability of the body to break down carbohydrates, synthesize hormones, and absorb vitamins and minerals.